There’s a small risk your child may inherit your autoimmune or rheumatic condition.

If you have a rheumatic disease and are thinking about having a baby, you probably have lots of questions. Will your symptoms get better or worse? How safe are arthritis medications? What are the chances of complications such as uterine growth restriction (when a baby doesn’t grow as expected) or premature delivery? Can you safely breastfeed? These are real concerns, and it’s important to discuss them with both your doctor and OB-GYN when you’re still in the “thinking about it” stage.

Rheumatologists say the most common question they get is whether a parent can pass their disease to their child. The answer is complicated because heredity in rheumatic diseases isn’t straightforward, but the evidence is reassuring. 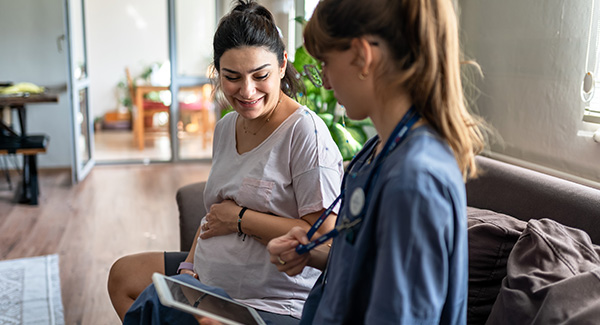 Although more than 100 genes are associated with an increased risk of inflammatory arthritis, the contribution from any one gene is extremely small and doesn’t predict whether a child will develop the disease. Studies of identical twins have shown that if one twin has rheumatoid arthritis (RA), the other twin, with the same genes, has about a 12% chance of having it, too. That’s higher than the chance if they don’t have a twin with the condition; however, the fact that it isn’t 100% suggests there may be more than genes that contribute to some autoimmune diseases, says rheumatologist Kevin Deane, MD, PhD, associate professor of medicine in rheumatology and research scientist at the University of Colorado. For example, it could be an environmental factor that affects a family.

While the risk of some rheumatic conditions is low among children with an affected parent, autoimmune diseases do run in families. If one family member has an autoimmune disease, there’s an increased chance that another family member will also have one, though not necessarily the same one. Thyroid disease, for example, is common in children born to moms who have autoimmune forms of arthritis, including RA, psoriatic arthritis, ankylosing spondylitis or lupus.

Most scientists think rheumatic conditions result from an inherited susceptibility interacting with an environmental trigger, such as a viral infection, smoking or, increasingly, diet. A genetic tendency isn’t enough to cause the disease on its own. Many people who have genes associated with arthritis – most of which play a role in the immune system – never develop a rheumatic disease. And many others with arthritis don’t have a family history of it. Some studies of northern Europeans suggest that at least in that population, genes and environment have a relatively equal role in disease development.

While it can seem that rheumatic diseases run in families, it just may be because people who live together are exposed to the same environmental factors. For example, members of a household often get the same infections, breathe the same air and eat the same foods. This means a rheumatic disease may develop not as a result of direct mom-to-child transmission, but because of shared environmental exposures after birth. Cigarette smoking, including secondhand smoke, is a well-known risk factor for adult arthritis, and some research suggests it might affect kids, too.

Researchers are just starting to take a serious look at the growth, development and health of children born to a parent with a rheumatic condition. One of the largest studies used data from two Korean health databases to look at kids born to moms with ankylosing spondylitis, a disease that almost always strikes people during their prime reproductive years. The study found that though these children often weighed less at birth, they were healthy and developed just like other kids their age.

Overall, the evidence suggests that parents who have a rheumatic condition can have healthy children who grow and develop normally. Keeping disease activity to a minimum before and during pregnancy and avoiding medications that can harm a fetus are key.

“There is no easy answer,” he adds. “However, in general, parents should be aware of an increased risk and talk to their family’s health care providers to understand what their personal family’s risk may be, and what signs and symptoms there may be that indicate a true autoimmune condition has developed.”