Arthritis medicines come with risks of side effects. Learn to weigh those risks against the benefits of the treatment.

It’s understandable to feel uneasy about taking new medication. You may feel like you hear as much about risks from drugs as you do about benefits. Taking medication does involve risk – even for the “safest” of medicines and drugs that have been around for a long time. The goal is to get the most good while doing the least harm.

When deciding whether to take a medication, don’t rely on the information you get from the news and in drug ads. It’s crucial to share your concerns with your doctor, who can talk about the likely benefits and potential risks specifically for you.

Here, we help lay the groundwork for these discussions – and hopefully reduce some of your fears about side effects, too.

Here are four common reasons you may be concerned, and some objective reassurances.

The risks aren’t clear.  On the laundry list of side effects, common and less serious problems are lumped with rare and more serious ones. You may not know which on the list are likely to occur and you assume the worst. For example, with bisphosphonates – a medicine used to treat osteoporosis – osteonecrosis of the jaw and atypical fractures of the femur are two rare side effects that have caused concerns.

You may be worried about those problems, but you don’t really know how likely they are to happen.

Keep in mind: Sometimes the numbers aren’t available, but other times they may not be easy to understand. Have your doctor or pharmacist put the available data into context for you so it’s clear.

The numbers can fool you. How numbers are presented makes a difference in your perception of risk. For example, methotrexate, a mainstay disease-modifying antirheumatic drug (DMARD) for treating rheumatoid arthritis (RA) and juvenile arthritis, is associated with a 3% risk of serious infection, meaning 3 in 100 people treated with the drug for a year get a serious infection. If a biologic drug, specifically a TNF-alpha inhibitor is added to methotrexate, the risk increases to 5% – meaning 5 in 100 people treated with both drugs get a serious infection.

Keep in mind: Just knowing there is a “significantly increased risk of infection,” doesn’t provide you the context you need. Understanding the numbers and talking you your doctor about your concerns may ease your fears. It may lead you to choose to increase your risk of infection because a more aggressive treatment approach could be key to shutting down pain and preventing joint deformity.

The drug seems worse than the disease. For many serious side effects, it’s unclear exactly what role the drug plays. Sometimes, the disease itself puts a person at risk for certain problems, with more severe disease equaling bigger risk. RA increases the risk of serious infection, including infections that require hospitalization, making it difficult to determine to what extent biologics may increase the risk.

Age, other health problems and other medications can also increase the risk of certain side effects. Studies show that having diabetes, chronic lung disease or taking corticosteroids also worsens the risk of serious infection in people taking biologic agents.

Keep in mind: While rare side effects can be blamed on drugs, doctors and researchers don’t know if there is really a causal association.

Newer drugs list more risks. Over time, the Food and Drug Administration made changes to its drug safety program in an effort to better inform consumers about possible risks. Some of these changes were made possible by 2007 legislation authorizing more rigorous safety monitoring. As a result, newer drugs may have a longer list of side effects than older ones – but that doesn’t mean newer drugs are more risky.

As an example, a handful of people with RA have developed Progressive multifocal leukoencephalopathy (PML) while taking the biologic drug rituximab (Rituxan). The risk is estimated to be about 3 in 100,000. However, just as many people with lupus have developed PML and have never been on biologics – but have been treated with cyclophosphamide, a drug to treat kidney disease and other conditions.

The occurrence of PML with rituximab resulted in a black box warning due to the way serious side effects are now reported to the FDA. Cyclophosphamide, an older drug that predates the new safety reporting procedures, doesn’t carry the warning; even though it’s possible it also caused patients to develop PML.

Keep in mind: Uncertainties surrounding side effects are the same, even though it may seem like newer drugs get associated with rare side effects more often because of how they are reported.

Take Steps to Reduce Your Risks

Just because a drug comes with certain risks doesn’t mean there’s nothing you can do about them. Many serious side effects can be reduced or prevented through smart strategies and a collaborative effort between you and your doctor.

Simple lab tests and exams often can spot early signs of a problem so measures can be taken to avoid or minimize the problem.

Talk Openly With Your Doctor

Even the most informed patient worries about starting a new drug or continuing with a therapy that causes bothersome side effects. If you tell your doctor what worries you and why, he or she can begin to put what is important to you in context with what is important medically to create a treatment plan.

If, after an honest discussion with your doctor, you decide you no longer want to take prescription drugs for your condition, make sure to tell your doctor. Stopping suddenly can have its own side effects, and it’s important for you to make the decision fully informed about what the disease, untreated, can do to your body over the long-term.

Get a better understanding of common food, drink and medication interactions so you can protect yourself while treating your arthritis.
Read More 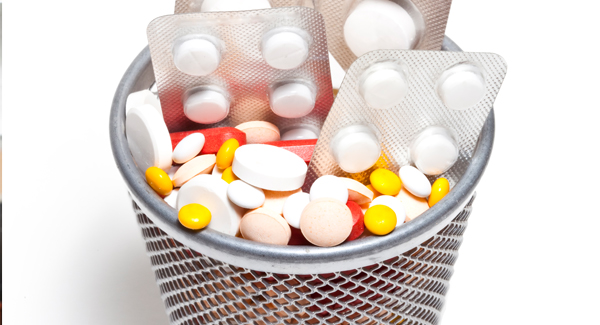 How to Discard Expired Medication

Get tips for safely throwing away unused or expired arthritis medications.
Read More