The Link Between Arthritis and Diabetes

Find out what the science says about the link between arthritis and diabetes.

Arthritis and diabetes have a lot in common. Almost half of all adults with diabetes—47%—also have arthritis.  People with arthritis have a 61% higher risk of developing diabetes than those without this joint disease.

What’s behind the link? Part of the connection stems from inflammation. Genetics and shared risk factors like obesity and inactivity are also involved. Learn more about the risk factors and how to combat your individual risk below.

When you have one autoimmune disease, you’re at higher risk for another. “Once your immune system starts acting abnormally, it can affect other organs,” explains John Miller, MD, instructor of medicine in the Johns Hopkins Arthritis Center. Part of the reason people get more than one autoimmune disease is genetic susceptibility, which is also why these diseases tend to run in families, Miller says.

Inflammation is another culprit. Levels of cytokines—inflammatory substances such as tumor necrosis factor alpha (TNF-alpha), and interleukin-6 (IL-6)—are higher in people with autoimmune forms of arthritis and both types of diabetes. Type 1 diabetes is an inflammatory condition. In type 2, inflammation is related to factors like obesity and insulin resistance. “We know fat cells release inflammatory signals,” Miller says.

For people with autoimmune types of arthritis, dampening inflammation with disease-modifying antirheumatic drugs like methotrexate, hydroxychloroquine (Plaquenil), and/or TNF-inhibitors (such as adalimumab (Humira), certolizumab pegol (Cimzia), etanercept (Enbrel), golimumab (Simponi, Simponi Aria) and infliximab (Remicade)) improve blood sugar control, too. These treatments may reduce the risk for developing diabetes in people with inflammatory arthritis. According to a 2019 study in PLoS One, RA patients who took TNF inhibitors were at significantly lower risk for diabetes.

The Problem With Steroids

Another drug used to calm arthritis inflammation has the opposite effect. Prednisone and other steroid medicines increase blood sugar levels by stimulating the liver to release more glucose, and by slowing its movement into muscle and fat tissue.  In a 2017 study published in the Annals of the Rheumatic Diseases, the DMARD plaquenil and the biologic abatacept (Orencia) both reduced diabetes risk, while steroids increased it.
Higher steroid doses and longer use compound increases in blood sugar. “The goal for everybody is to use the lowest amount of steroids for the shortest duration,” Miller says.

Doctors used to believe that OA stemmed primarily from age-related wear and tear of cartilage, but today the focus has turned to the role of other disease processes on the joints. More than half of people with type 2 diabetes have OA, compared with just over a quarter of those without diabetes. That may not be surprising, considering that the two conditions share a number of common risk factors. Both OA and diabetes disproportionately affect people who are older, overweight, and inactive.

Yet the connection goes even deeper. Studies have linked OA to metabolic disturbances, which suggests that diabetes may affect the arthritis disease process directly. High blood sugar contributes to the development of reactive oxygen species (ROS)—molecules that encourage the production of pro-inflammatory cytokines (substances that are secreted by certain immune cells). It also triggers the production of compounds called advanced glycation end products (AGEs), which build up in and damage joints.

Take Good Care of Yourself

The three cornerstones to diabetes and arthritis management are weight control, diet, and exercise.

The first-line fix for both conditions is to lose weight. Excess weight contributes to insulin resistance and puts added strain on joints. Each additional 2 pounds of body weight puts 13 extra pounds of load on arthritic knees. Modest weight loss will alleviate pressure on the lower extremities, helping to ease pain in the hips, knees, and feet. Losing just 5 to 10 percent of body weight can significantly reduce blood sugar.

Eat regularly and consistently to help your body maintain steady blood glucose levels. Discuss with your doctor how to choose your foods wisely. Eat some protein and healthy fats at each meal, along with whole-grain carbohydrates and non-starchy vegetables, and limit portion sizes.

Finally, get regular exercise—at least 150 minutes a week of aerobic activity. “Water aerobics and low-impact activities like biking can be helpful,” Miller says. Add in strengthening, flexibility, and balance-promoting exercises a few days a week. Just be careful not to exercise to the point of pain. Working out with an experienced trainer or physical therapist can help reduce your risk of injury. 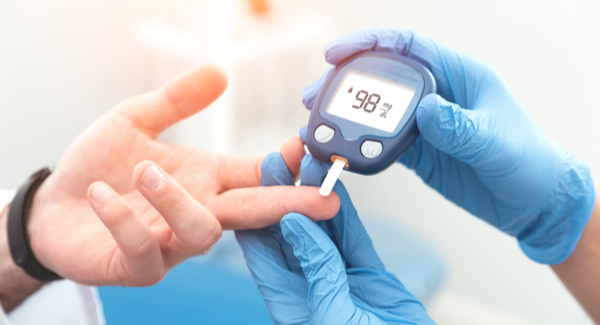 Diabetes is common but preventable if you have RA.
Read More

Learn the link between cancer and the drugs used to treat RA.
Read More