Appearing on reality TV let Meg Maley open up about her PsA.

Meg Maley isn’t one to let an opportunity slip by or negativity dim her joy. If you have any doubt about her optimism, just check the tattoo on her foot: “Always Yes.” That attitude — and maybe her infectious smile — landed her a spot on the CBS reality TV show Big Brother in 2015, which changed the course of her life.

But despite her buoyant outlook, “Always Yes” isn’t always easy. Meg, 29, has psoriatic arthritis (PsA), which causes persistent joint pain, bouts of fatigue and vision problems that make it impossible to drive some days.

“It’s hard for people to understand, because normally I’m very outgoing, and I have a big personality and I like to be really active,” she says.

Diagnosed when she was about 12 years old, Meg hid her PsA from even her closest friends. As she got older, she came to see it as something she had to deal with, but not something that would define her, so she kept the painful details to herself.

After finishing her college degree in music theater, she moved to New York City, where she spent a couple of years auditioning and waiting tables. That’s where Big Brother’s casting people found her.

“My life super changed at that point,” she says with a laugh. The “reality world” introduced her to her future husband, Mike Holloway, a winner of CBS’s Survivor, and to a new career in casting for reality TV shows.

“For me, reality TV was such a blessing in disguise; it really changed my life around, so it’s cool to be able to give [other people] that opportunity,” says Meg, who now lives in Texas. Plus, “I get to meet a ton of people, which I love.”

But appearing on Big Brother revealed her reality to viewers. She performed poorly in physical competitions, and viewers who watched the 24-hour live-stream online noticed other details: She took pills, she “walked funny” sometimes, she has knee scars and she always hit the hot tub early in the morning before anyone was up. Social media began to buzz about it.

“They put together that I had some sort of autoimmune disease,” Meg says. “They didn’t know what it was, but they knew it was something of the sort.”

After the show ended, she decided to go public about her psoriatic arthritis — on her terms. “I didn’t want people to think I wasn’t cool about it or proud of it; I just didn’t want that to be the first thing people saw in me,” she says. She and her friend Andrea Boehlke (a Survivor alumna) started co-hosting Reality Takeover, a fundraiser in New York and Los Angeles benefitting the Arthritis Foundation. (She has also joined arthritis Advocates on Capitol Hill and participated at the Arthritis Foundation’s JA Conference.)

“It was definitely a big decision to announce what I have and what I’m going through. But after it happened, it was like, ‘Oh my gosh, why did I not do this earlier?’ It’s so much easier,” she says.

When she had a major flare a few years ago, she finally felt more comfortable opening up about it. “[It was] the first time I really felt comfortable reaching out to my friends,” she says. “We went on a trip, and I was able to tell the people there that I have about 3% today, but I still want to be a part. I normally would have canceled.”

She even posted on social media about dealing with her arthritis — something she never would have done before. But she’s found that sharing her story brings an outpouring of support from the arthritis community, including high school students and parents of kids with juvenile arthritis.

She’s not as self-conscious now about having to take breaks or ask for help — or about wearing what she wants. “My psoriasis is something that I’ve struggled with because I am the girl that wears short skirts and crop tops,” she says.

Meg’s PsA has been difficult to tame; she also has been diagnosed with uveitis, an inflammatory eye condition.

In addition to taking a biologic, she takes care of herself. While she loves to “pig out” and have a good time, she eats healthfully and exercises regularly, even if it’s slowly riding a stationary bike or walking her dog. “I make a constant effort to make sure the right things are going on in my body and I’m not doing more damage.”

And she focuses on “Always Yes.” It might seem “cheesy,” she says, “but it’s so true, and it’s something I try to remember, because even through pain and things, you still can have really good experiences and try to really live the best life you can.”

Ask questions. There are a lot of people with experience and answers who can help.

Find the right doctor. Make sure you’re comfortable and have confidence in your doc. “I went through a ton of rheumatologists,” she says. “When I was way younger, I did not click with some of the old-school practices because I didn’t take no for an answer. I remember one doctor telling me that there were no more medicines and I just had to live with it, and that was crazy to me.”

Be proactive. Don’t be afraid to tell your doctor about your concerns. In the past, she recalls, “I would never call my doctor and say, ‘I’m in pain.’ But you should do that because they can help.” 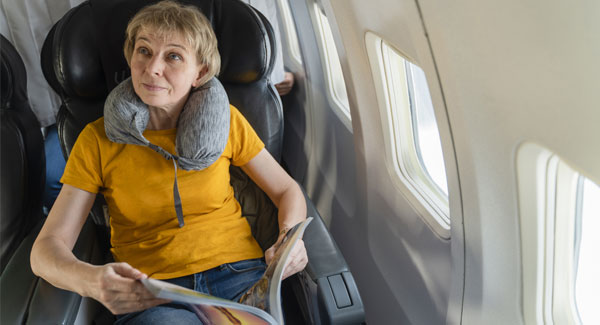 A new Bill of Rights aims to educate airline passengers about their rights.
Read More