Experts weigh in on the autoimmune protocol, lectin-free and low FODMAP diets.

Many popular diets promise to protect the heart, nourish joints, boost energy or even control autoimmune conditions. The research is clear: No diet can cure arthritis – but can a diet ease arthritis symptoms? Research gives the popular Mediterranean diet high marks for its anti-inflammatory benefits and varied food choices. While vegetarian and vegan diets are more restrictive, studies also show anti-inflammatory benefits. Some people with arthritis may consider trying lesser known diets that they’ve heard about online. Here’s what dietitians have to say about three options.

Perks: “Done in a structured and monitored way, with testing periods and reintroduction of foods, the AIP diet may help patients identify foods that trigger [rheumatoid and other forms of inflammatory arthritis] symptoms,” says Alicia Romano, clinical registered dietitian at the Frances Stern Nutrition Center at Tufts Medical Center. It also cuts out processed foods and emphasizes whole-food based meals, which can help dieters shed pounds and reduce inflammation.

Drawbacks: It’s restrictive. In addition to nixing the same foods as the paleo diet, including dairy, grains and legumes, AIP bans nuts, seeds and alternative sweeteners. Following the AIP long-term can result in nutrient deficiencies and resulting complications. Plus, there’s no formal protocol, so it’s tough to determine which AIP would be best for your unique needs.

Bottom line: AIP may be a last-line approach when less restrictive nutritional therapies have failed. People who are underweight, malnourished or pregnant should avoid AIP.

Former cardiac surgeon Steven Gundry, author of the book The Plant Paradox, which promotes this diet, claims naturally occurring proteins called lectins are a key culprit in Americans’ health problems. According to the theory, a high intake of lectins, found in some dairy and plant foods, may damage the intestinal lining, affecting the way nutrients are absorbed and eliciting an immune response and autoimmunity in certain people, Romano explains. However, this has not been studied in humans, and “the lectins considered toxic are those that we do not eat, such as uncooked kidney beans,” she adds.

Perks: People who are sensitive to beans, lentils and grains (which have higher levels of lectins when they are raw or undercooked) may notice a benefit from restricting them – and the protocol is not as extreme as diets like AIP.

Drawbacks: It’s hard to stick with because it’s restrictive, and it eliminates many foods with inflammation-fighting properties. The diet rejects grains, legumes and most dairy products, along with nightshade vegetables, cucumbers, nuts and seeds. “Unfortunately, any time you limit variety in the diet, you’re setting yourself up for nutrient deficiencies,” says Turner.

Bottom line: If you have a lot of gut issues, going lectin-free may offer some relief. The key, says Turner, is working with a nutrition professional experienced with elimination-type diets to make sure you get needed nutrients, particularly if you plan to stay on the diet for more than six weeks.

Turner’s advice: “Use these diets as a temporary guideline to gather information about which foods are problematic for you, and then try to build a moderate diet that is sustainable, but still keeps inflammation in check.”

“FODMAP” is an acronym for a group of carbohydrates (fermentable oligosaccharides, disaccharides, monosaccharides and polyols) that are not easily digested and may ferment in the gut, leading to bloating, gas, water-retention and diarrhea. Advocates say this diet alleviates symptoms by eliminating the culprit carbs, such as fructose and lactose. Foods that fall under the FODMAP umbrella include wheat, certain fruits, vegetables and dairy products, and sugar alcohols, which are in some artificial sweeteners.

Perks:  Heidi Turner, a functional registered dietitian nutritionist at The Seattle Arthritis Clinic at Northwest Hospital in Seattle, uses a low FODMAP diet for clients who have arthritis as well as irritable bowel syndrome (IBS). Studies have found the diet can alleviate symptoms of IBS, and some recent research suggests certain types of gut bacteria may trigger autoimmunity. “For patients who have a lot of bloating, gas, heartburn or diarrhea, following a low FODMAP diet may reduce inflammation by reducing fuel for more problematic bacteria.  This can have a calming effect in the gastrointestinal tract and may help reduce inflammation in other areas, including joints,” she says.

Drawbacks: The diet restricts nutrient-dense foods like onions, garlic, cabbage, brussels sprouts, apples, pears, watermelon, plums and asparagus. “Many of these foods contain antioxidative nutrients that have been shown to reduce inflammation and omitting them for too long could actually have a negative effect on building beneficial bacteria in the gut,” Turner says. They’re also vegetarian staples, so staying on the diet may be challenging for vegetarians.

Bottom line: “While there’s no peer-reviewed research to suggest a low-FODMAP diet improves arthritis symptoms, following the diet for a couple of months can help improve bacterial balance which, in some, may help to reduce inflammation,” says Turner. 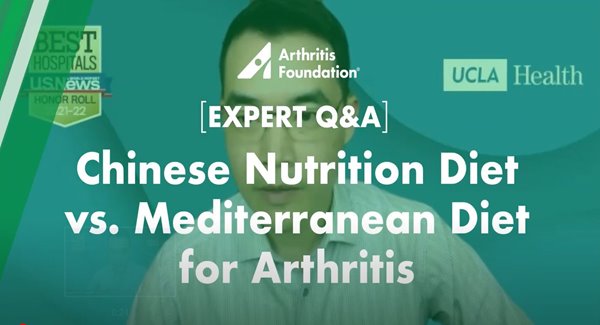 A integrative doctor discusses the evidence and differences between a Chinese nutrition diet and the Mediterranean diet for arthritis symptoms.
Read More