RA's Effect on the Brain

Learn about the possible links between rheumatoid arthritis and cognitive effects and how to manage them.

A lot of people with rheumatoid arthritis (RA) report having trouble with memory, attention, and mental focus. They forget names and appointments, struggle to find the right words and have trouble making and carrying out plans. Some say that the loss of mental clarity, commonly called brain fog, is almost as distressing as arthritis itself.

It’s hard to say exactly how common fuzzy think­ing is in RA because researchers have largely ignored it.

“We have relatively good literature on cognitive problems in lupus and fibromyalgia, where brain fog is well established, but nobody has really studied RA,” explains Patti Katz, PhD, a professor of medi­cine at the University of California, San Francisco.

Katz and her colleagues looked at 15 studies on RA and cognition published between 1994 and 2016. Many were small – less than 100 patients – and not all were high quality. Yet most showed that people with rheumatoid arthritis performed more poorly on cognitive tests than their peers or controls. Memory, verbal communica­tion, attention, concentration and problem-solving seemed to cause the most trouble.

Who Gets It and Why?

There are several theories why cognitive prob­lems may be more common in RA and other inflammatory types of arthritis.

Some scientists, including Mark Swain, MD, a professor at the University of Calgary in Canada, think inflammation tops the list. More than a decade ago, he and his colleagues demonstrated that chronic inflammation in the body – the result of cytokines like tumor necrosis factor (TNF) – can change the way the brain functions. The brain doesn’t change structurally, but networks of nerves start talking to each other differently. This can contribute to many disease-associated symptoms, including brain fog.

Swedish researchers reached the same conclusion after fol­lowing nearly 1,500 patients with various joint disorders for two decades. They found a significantly higher rate of cognitive decline in those with RA and suggested that chronic inflammation “played an important role in increasing the risk.”

But Katz thinks it might not be that simple.

“RA is a disease that has a lot of elements, and we need to think about all of them because people are really complicated,” she says.

Some factors that may contribute to brain fog include:

• Pain. It’s well known that chronic pain can affect thinking. Some of the brain’s pain processing centers overlap with areas involved with memory and attention. When they compete for limited processing resources, pain often wins out. Pain may also rewire how the brain works.

• Depression. Depression is common in RA. Symptoms can include trouble with planning, decision-making, memory and mental clarity – the same symptoms reported by people with brain fog. Katz says one of the challenges of studying cognitive problems is the difficulty in distinguishing them from depression. Some researchers – though not Katz – see brain fog as a symptom of depression, not a separate condition.

• Cardiovascular Disease. People with RA are more likely to have narrowed or blocked arteries in the brain – the result of systemic inflammation. This can cause problems with memory, thinking and reasoning.

• Arthritis Meds. Methotrexate is a mainstay of RA treatment and corticosteroids are sometimes used for short-term pain relief. Both may cause cognitive problems, mood changes and confusion. A small study published in Toxicology and Applied Pharmacology in 2017 found that RA patients treated with methotrexate and other conventional disease-modifying antirheumatic drugs (DMARDs) had higher risk of developing dementia than those who took other medications. Moderate to high doses of corticosteroids can lead to cognitive problems in some people, more commonly women.

• Lack of Exercise. Few things have a stronger demonstrated link to brain health than exercise. Thousands of studies show the long-term benefits, but new research suggests exercise can have an immediate effect, too. Carson Smith, MD, and colleagues in the University of Maryland School of Public Health found that older adults’ memory improved significantly after a single 30-minute exercise session. A French study found that just a 15-minute jog boosted energy and mental clarity.

What the CDC Says

In 2017, Centers for Disease Control and Prevention (CDC) researchers published a study comparing cognition in more than 6,000 people with and without arthritis. Unlike earlier, smaller studies, it found no difference in brain function between the two groups. The researchers say they had different results because they considered pain, depression, lack of exercise, age and other factors linked to both brain fog and RA. Once these were accounted for, people with RA showed no more cognitive problems than other older adults. What was associated with elements of impaired brain function were a sedentary lifestyle, depression and having a lower socioeconomic level. The implication is that RA itself doesn’t cause brain fog, but factors associated with it may.

If cognitive problems are complex, then the solution needs to be complex, too. That’s the thinking behind a groundbreaking clinical trial in Finland called the FINGER study. In this two-year ran­domized controlled trial involving more than 1,200 older adults with an elevated risk of dementia, lifestyle changes including an anti-inflammatory diet, exercise and brain training cut cognitive decline by 30%. Targeting several risk factors will deliver the optimal benefits.

Here are some tips that can help you keep your brain sharp:

• Sleep well. Deep, restorative sleep helps to clear away the cobwebs. Develop a healthy sleep routine and stick to it. Make sure your bedroom is cool and dark, avoid late-day caffeine and turn off screens at least an hour before bed.

• Talk to your doctor about medications. If you take conventional DMARDs or long-term corticosteroids, discuss the pros and cons of switching to another drug. Talk about your other meds, too. Some, including anti­cholinergics (used to treat overactive bladder, COPD and other conditions) can also cause brain fog.

• Don’t skip workouts. There’s almost nothing exercise doesn’t help. Pain, mobility, mood, fatigue and mental clarity all may improve in a single session, but the greatest benefits happen over time.

• Notice brain fog patterns. Your symptoms may be worse in the morning or when you’re tired or stressed. Try to schedule tasks that require focus and attention when you’re at your best.

• Be present. It’s easy to worry about the future, espe­cially when you have a chronic illness. But concern about things that haven’t happened yet take up valuable mental space. Instead, focus on the present moment, says Ashira Blazer, MD, a rheumatologist and assistant professor at NYU Langone Health in New York

Bottomline, whether having RA directly contributes to cognitive impairment or not, following a healthy lifestyle and keeping your disease under control can help keep brain fog at bay. 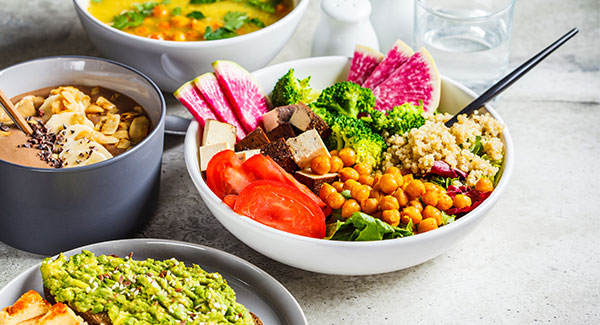 A new approach to a popular diet shows a positive effect on the microbiome, a key player in inflammatory arthritis severity and outcomes.
Read More

The Connection Between Pain and Your Brain

There is a direct link between your brain and your arthritis pain. Learn how scientists are now beginning to understand this connection and how your brain can help curb your pain.
Read More